In the USA this week, Police Officer Derek Chauvin was found guilty by a jury on all three charges in the murder of George Floyd, an African American who died as a result of Chauvin’s physical force of his knee against George Floyd’s neck for over 9 minutes.

Many would see this as justice, which indeed it is for George Floyd and his Family, however it carries the weight of a bigger message worldwide.

The message of ACCOUNTABILITY.

Far too often we see the injustice and systemic racism that hides behind ‘authority’.

In Australia, the rising cost of life within our Indigenous Communities through deaths in custody continues to go unaddressed by the Government.  It’s been 30 years since the Royal Commission into Deaths In Custody Recommendations was released however still nearly 500 lives have been lost….lives that deserved to be saved.

Chauvin’s conviction demonstrates accountability for decisions and actions made against others and is the only way forward to being part of cultural change.

Throughout this trial, it was powerful to hear testimonies of Chauvin’s own colleagues and other members of Police.  To witness their authentic and honest accounts of the death of George Floyd along with their unfiltered dismissal of that behavior within the Police, was a strong signal that #EnougHisEnough.

It’s important not to lose sight of the fact that whilst there are people within ‘systems’ that are designed to protect us, who use that authority to cause trauma and injustice, there are far more people who are in those systems who are dedicated to serving their communities.  I am certain that most of us have encountered the individuals who are toxic and should be removed.  I am equally certain that most of us have encountered individuals whose dedication and work have supported and helped others.  So with that in mind, my concern is that we ‘paint all individuals with the same brush’ as those who commit crimes within the system.  I don’t have the solution to that dilemma however I have faith in humanity that we can find a way.

Will this conviction of Chauvin change systemic racism? No, however, it goes a long way to becoming the first step towards unified cultural change and for that….we have hope.

Jaynie Morris is an Author, Speaker and Advocate for Women over 50.  She is the Founder of SheroesUnlimited Global Community for Women Over 50.

Regular updates on what I am doing!
Receive the full version of the book for FREE 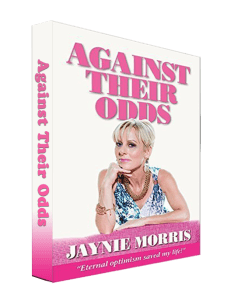 I'm celebrating 9 yrs since I was given 2 months to live.I'm grateful for every moment & love to give to others so they can too!You get the Free GIFT-my book 'AgainstTheirOdds'.When you've read it let me know! #lovelivinglife #AgainstTheirOdds #FreeGift #life #books #booklover

This May I am celebrating 9 years since I was give

Every year on Mothers Day I think of all the Mothe

In honour of Mothers Day post your Mums photo and

💖💖 Jim Rohn was one of my dearest friends as